Will Millennials Vote for Barack Obama Again in November 2012? 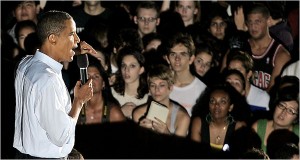 Millennials (born 1982-2003) were crucial to Barack Obama’s 2008 election. Other than the state of the economy, the most pivotal factor in determining the outcome of the 2012 general election is likely to be whether or not America’s youngest voters repeat their 2008 electoral performance in 2012.
In November 2008, Millennials comprised about 17% of the electorate and voted overwhelmingly for Barack Obama over John McCain (66% to 32%). With older generations dividing their votes almost evenly between the two candidates, Millennials accounted for about 80% of Obama’s national popular vote margin over McCain, turning what would have been a narrow win into a decisive seven-point victory.
So far, the data suggests Millennials are poised to support Barack Obama at the same level this year that they did four years ago. In a recent Pew survey, Millennials preferred Obama over Mitt Romney, the likely Republican nominee, by a 62% to 36% margin. But this year, Millennials make up 24% of those eligible to vote. Coupled with its partisan unity in comparison with older voters, the sheer size of the Millennial generation, America’s largest ever, could make its impact even more decisive in 2012 than in 2008.
Whether Millennials have that kind of impact depends on what the two parties do to attract their votes.  For Republicans, the best approach is to connect with Millennials before they are solidly in the Democratic camp for the next three or four decades. A few Millennial Republicans such as John McCain’s daughter, Meghan, and Kristen Soltis, a GOP pollster, have argued that their party should moderate its stance on social issues and immigration in order to have greater appeal to their highly tolerant and diverse generation. So far, however, the GOP presidential field has attracted relatively little Millennial support; through Super Tuesday, the Republican frontrunners (Mitt Romney, Rick Santorum, and Ron Paul) combined had received less than half the Millennial votes that Barack Obama did in 2008. Perhaps the lack of Millennial interest in the GOP candidates explains why Republicans in at least half of the states are more focused on limiting Millennial voting turnout than in actively courting the generation’s support.
For Democrats, the concern is not so much the partisanship of Millennials, but their engagement. One way to reinforce Millennials’ Democratic leanings is to remind them of their stake in the election by emphasizing the Millennial-friendly policies the Obama administration has pursued. Help with the cost of attending college, funding more national service opportunities, and permitting young people to remain on their parent’s health insurance until age 26 are all initiatives the Obama team could raise with Millennials. Already that campaign is gearing up online and offline organizational efforts to bring Millennials to the polls in November that exceed the technological sophistication of its very successful efforts in 2008.
If Millennials vote in numbers proportionate to their presence among eligible voters, their continued support of the president should allow him to overcome any attrition he suffers among older voters. But if large numbers of Millennials do not vote, the president’s reelection chances will be sharply reduced. Whichever alternative occurs will very likely determine whether Barack Obama or his eventual Republican opponent is inaugurated as president on January 20, 2013.
Q&A on this blog were captured by Policymic here