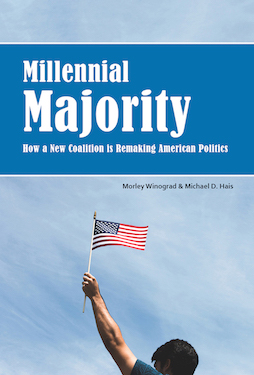 Final results from the 2018 midterm elections make it clear that Donald Trump’s presidency has accelerated a political dynamic likely to defeat him and his party in 2020. Five years ago, our book, Millennial Majority, identified a new majority coalition in American politics led by Millennials, minorities and women. This year’s midterm elections saw this coalition solidify its support of Democrats, particularly in U.S. House races, that caused many to conclude a “Blue Wave” had at least temporarily overwhelmed Republicans. But in fact, the changes in the political allegiance of major demographic groups evident in this year’s voting patterns represent a more permanent realignment of American politics. The size and national breadth of this realignment provides the Democrats a likely majority, not just of the popular vote, but, in 2020, of the Electoral College as well.

The single biggest and most important part of the shift in party allegiance evident in this year’s elections was among college educated white women, particularly in the suburbs. In the 2014 midterms, white college-educated women voted for the Republican candidate by four percentage points more than the Democratic candidate. In the 2016 presidential election they supported both equally. But, in 2018, 59% of white college-educated women voted for a Democratic candidate in the House, 20% more than voted for the Republican. This eight percentage point shift was the largest of any swing among demographic groups in this year’s election compared to the 2016 presidential election. They fled the Republican party, many for the first time, because of the tone and content of President Trump’s rhetoric and the Republican Congress’s attempt to repeal ObamaCare. If the GOP nominates Trump as its presidential candidate again, most of this group will cast their second ballot in a row for Democrats, vastly increasing the likelihood that it will become a lifelong habit.

Although many talk about the gender gap in the American electorate, far fewer comment upon the even greater “age gap,” as Simon Rosenberg calls it. Excited for the first time by the campaign messages and symbolism of a younger and more diverse set of Democratic Congressional candidates, Millennials turned out at record rates in the midterms. CIRCLE, the most authoritative source on youth voting, estimates that 31% of Millennial 18-29-year-olds voted in 2018, a vast improvement over their 21% turnout rate two years ago and the highest level of youth participation in this century. Their 67% to 32% preference for Democrats exceeded the Democratic margin among college-educated white women of 20% (59% to 39%). Since Millennials will continue to vote at higher rates as they age, they will continue to bolster the Democrats’ electoral prospects in 2020 and the decades ahead.

The third leg of the Democratic majority coalition stool, minorities, also increased their support for Democrats in the midterms, most likely because of Trump’s fear-mongering about immigrants at the campaign’s final rallies and Republicans’ decision to make immigration the defining difference between them and Democrats. Hispanic voters preferred Democrats by a 40% margin (69% to 29%), exceeding their normal level of Democratic support in presidential elections, e.g. 38% in 2016, and far greater than their Democratic margins in prior midterm elections of 26% in 2014 and 32% in 2010. In addition, despite almost presidential year overall voter turnout levels, Hispanic voters maintained their same 11% share of the electorate as in 2016. Asian-American voters continued their rapid movement into the Democratic Party as well. In the 2014 midterms they slightly favored Republicans by one point, which became a 36% Democratic margin with Trump on the ballot in 2016. In 2018 the margin grew to an astounding 54% Democratic advantage (77% to 23%). Meanwhile, African Americans maintained their loyalty to the Democrats by a whopping 81% margin. The absence of minority voters in the Republican Party’s coalition will become even more of a liability when the Electoral College becomes the key to victory in 2020.

In the 21st century, other than when Barack Obama was on the ballot, these demographic trends brought Democrats national popular vote majorities, but not Electoral College victories. However, the states colored blue after the midterms, thanks principally to the movement of suburban women into the Democratic coalition, suggest that problem may be less severe in 2020. NBC’s Chuck Todd used the 2018 House vote by state and Nate Silver’s 538 website used the 2018 popular vote in each state to come to the same conclusion. If the midterm vote was replicated in 2020, Democrats would win a 284 electoral vote majority according to Todd and 314 votes according to Silver. Because the Democratic Blue Wall states of the upper Midwest returned to the Democratic fold in 2018 and Nevada, Colorado and Virginia appear to have turned blue, the Democrat’ path to victory no longer needs to run through Southern states like Florida, North Carolina or Georgia to win the presidency, even as those states, plus Texas, remain temptingly close for the Democrats.

The pronounced Democratic shift of Millennials, minorities and college-educated women in 2018 was accompanied by a concurrent, but smaller, movement of white non-college educated voters toward the GOP, particularly in rural areas and the South. This part of the dynamic also works against the Republican Party, because it makes it difficult for its candidates to separate themselves in primaries from Trump. For example, even though only 37% of the total electorate is in favor of the President’s re-election, more than 8 in 10 Republicans think it’s a good idea. Tangled in the web of President Trump’s strategy to appeal only to his loyal base and unable or unwilling to break free, the Republican Party now faces an existential crisis in 2020 if it nominates President Trump for a second term. Of course, Democrats could still lose the election by nominating unappealing candidates or running an ineffective campaign, but right now the 2020 presidential election is theirs to lose.

For those interested in reading more, our book Millennial Majority is available on Amazon.