Want to See Better US-Chinese Relations? American and Chinese Millennials Could Be Key 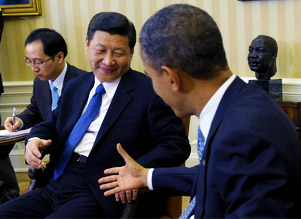 While it is still fashionable for politicians in both China and the United States to prove their domestic leadership credentials by taking tough stances against their nation’s chief economic rival, the results of recent Pew surveys conducted in the two countries suggest that this type of rhetoric is a holdover from an earlier era. An examination of the beliefs among the youngest generational cohorts in each country shows a distinct lack of the ideological vitriol so common in the 1960s and 1970s. As a result, we might see a far more congenial relationship between the world’s two great powers --- at least once the older generations fade away.

Let’s hope so, because older generations sometimes seem  more committed to discord  than accord. During the 2012 US presidential campaign both President Barack Obama and Governor Mitt Romney took full advantage of opportunities to criticize their opponent for the softness of his approach to China.  Xi Jinping, who was named the General Secretary of the Chinese Communist Party about a week after Obama was reelected and will become China’s Premier early next year, has been no less willing to rhetorically censure the United States.

Yet the Pew research indicates that the youngest generational cohort in both the US and China holds positive attitudes toward and favors contact with the other country.   In the United States that youthful cohort is the Millennial Generation (born 1982-2003), America’s largest and most ethnically diverse and tolerant generation to date. Of the 95 million US Millennials, about four in ten are nonwhite and one in twenty is of Asian descent, with Chinese-Americans comprising the largest portion of that segment. By contrast, among U.S. seniors and Boomers, only about one in five is nonwhite and about two-percent of Asian heritage.

Generational theorists have not definitively named the Millennials’ Chinese counterparts. Some observers, however, have called at least their urban segment “Little Emperors.” Similar to American Millennials, this generation was often reared by their own hovering “helicopter parents” in a highly protected, hyper-attentive manner that reflected the importance of these special children—the  product of China’s  “one child” policy—and the  great expectations their parents had and continue to have for their offspring. The result of this  upbringing are cohorts of civic-minded, pressured, conventional, patriotic American and Chinese young people who revere their parents, are optimistic about their nation’s future, and  open to the world.

In China, the Pew research, conducted in March and April, 2012, contained a battery of questions probing attitudes toward the United States, its interactions with China, and its influence on Chinese society. Across all of these questions, the youngest cohort (18-29 year olds) held significantly more favorable opinions about America than older Chinese. Given that Chinese who are 50 or older include generations that established the Communist regime in 1949, fought American troops in Korea, and were part of the ideological Red Guards of the 1960s, this is not altogether surprising.

Overall, a majority (51%) of China’s youthful cohort held a positive view of the U.S. as compared with only 38% of older Chinese. More specifically, majorities of 18-29 year olds said they admired American technological and scientific advances (77%), American ideas about democracy (59%), U.S. music, movies, and television (56%), and agree that it is good that American ideas and customs are spreading to China (50%). Across all of these dimensions favorable attitudes toward the United States and its influence were at least 15 percentage points higher among the youngest Chinese cohort than the oldest. In only one area, the American way of doing business, did less than a majority of 18-29 year old Chinese (48%) indicate admiration of the United States; even on this dimension there was a 12-point gap between the positive opinions of younger and older Chinese respondents.

Pew did not ask the same questions in its American surveys that it did in the Chinese study. However, it did examine many of the same dimensions permitting valid comparison of survey results in the two countries. In a November 2011 survey examining the large generation gap in U.S. politics Pew asked if it was better for the United States to build a stronger economic relationship with China or to get tough with China on economic issues. American Millennials, a generation corresponding to Chinese 18-29 year olds, overwhelmingly favored a policy focusing on building stronger trade relations with China rather than one based on toughness (69% to 24%). By contrast, a plurality of the two oldest American generations—Boomers and seniors—believed that a tougher approach instead of closer economic ties with China was best (48% to 45%). These results reflect the far greater support of Millennials than older generations for free trade agreements overall (63% to 42%).

In its April 2012 Values survey, Pew examined the openness of Americans to “foreign,” if not specifically Chinese, influences. In one question, respondents were asked to agree or disagree with the statement: “It bothers me when I come in contact with immigrants who speak little or no English.” Only 32% of American Millennials compared to 44% of all older generations agreed. In another item Pew asked for agreement or disagreement with this statement: “the growing number of newcomers from other countries threatens traditional American customs and values.” Only four in ten Millennials (41%) as compared with a majority (53%) of Boomers and seniors agreed.

American Millennials are a generation that seeks to resolve disputes and conflicts by searching for win-win solutions rather than absolute victories over their opponents. Recent research suggests that their Chinese counterparts share many of the same attitudes. This bodes well for relations between their two countries in coming decades. The big question for the more immediate future is whether older generations in America and China will be able and willing to set aside the attitudes based on the ideologies and policies of the past long enough for Millennials on both sides of the Pacific to forge a new, less contentious relationship.