The Generational Cycle Is Turning on Immigration 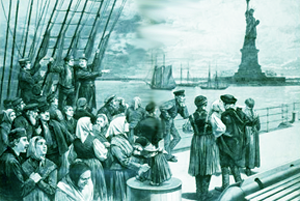 Americans have been of two minds about immigration almost since the founding of the Republic. On the one hand, we swell with pride at the welcoming words of Emma Lazarus’s Statue of Liberty sonnet: “Give me your tired, your poor, your huddled masses yearning to be free,” and coverage of the swearing in of new citizens from around the globe has become a staple of July Fourth television newscasts.

By contrast, each new large wave of newcomers has led to the emergence of nativist groups and to laws designed to minimize immigration. The arrival of millions of German and Irish immigrants before the Civil War led to the creation of the anti-immigrant Order of the Star Spangled Banner and the electoral successes of the American (or Know Nothing) Party in 1854 and 1856. The waves of Eastern and Southern European immigrants in the late-19th and early-20th centuries produced a revival of the Ku Klux Klan and the passage of a 1924 law, which imposed low nationality quotas on immigrants from that part of Europe as well as Asia and Africa.

But history also indicates that, although mixed attitudes about it may endure, concern with immigration and fear of immigrants rises and falls as new generations with different attitudes emerge.

A February national survey of nearly 1,500 Americans between the ages of 18 and 64, conducted by communication research firm Frank N. Magid Associates, suggests that the United States is about to enter a period in which the debate about immigration should become less contentious, primarily because of the increasing presence within the electorate of the tolerant and diverse Millennial generation, a cohort now in its teens and 20s. Millennials will represent one out of every three eligible voters by the end of this decade.

According to Magid, about three in 10 Americans are completely opposed to all immigration—legal and illegal—while an identical number perceive a need for even undocumented immigration, believing that “the United States needs illegal immigrants to do work others won’t.”

Millennials, on the other hand, tend to be more positive about immigrants. For most Millennials, immigration is not an abstract or academic matter. It is as up close and personal as their parents, their friends, their classmates, and their next-door neighbors. Nearly one out of five of them have at least one immigrant parent, and almost 30 percent of millennials are Hispanic or Asian—groups containing large numbers of recent immigrants.

As a result, Millennials agree more strongly than older generations that “immigration is an American legacy worth keeping,” 57 percent to 52 percent. The majority, 51 percent, also agrees that their community should be “immigrant friendly,” compared with 39 percent of older generations.

They are also less likely to believe than their elders that “illegal immigration is out of control,” 67 percent to 75 percent. Millennials are also likely to accept the proposition that the country “needs illegal immigrants to do the work others won’t,” 37 percent to 22 percent of older generations.

Generational theory says it is the historic role of “civic” generations, such as today’s Millennials and last century’s GI generation, to be the cohort in which the acculturation and toleration of newcomers to America reaches its apex.

A major theme of GI generation writers ranging from novelist Herman Wouk, (Marjorie Morningstar), to playwright Neil Simon (Biloxi Blues , Brighton Beach Memoirs) and sociologist Will Herberg (Protestant, Catholic, Jew) was the depiction of the way in which GIs of various ethnicities emerged from their immigrant homes and neighborhoods to achieve acceptance within the larger society.

In 1965, it was a GI generation-dominated Congress and GI president, Lyndon Johnson, that passed immigration-reform legislation overturning the nationality quotas established in 1924. Now, as a new ethnically diverse civic generation emerges in large numbers, American politics will renew its cyclical rhythm and return to policies that once again tolerate and include immigrants from every part of the globe.