The Future And Young Voters? 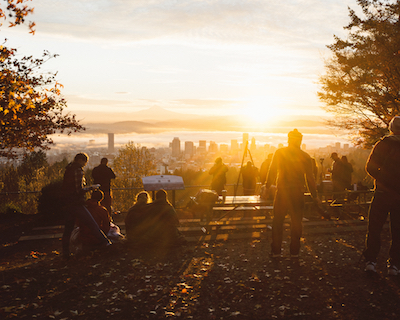 There is a body of accumulated academic research and current polling making possible a realistic forecast of how America's most populous generation will vote in the future. Not surprisingly, those projections suggest that the Democrats currently have the edge in winning the long term loyalties of Millennials.

"The man who is not a socialist (read 'liberal' in the United States) at 20 has no heart, but if he is still a socialist at 40, he has no brain." That aphorism has been variously attributed to Winston Churchill, George Bernard Shaw, and French World War I-era Prime Minister Aristede Briand. Most recently, the idea that people move from liberal to conservative beliefs and votes as they age was stated by Harvard political scientist, Yascha Mounk. However, as so often happens when conventional wisdom comes up against empirical data, the outcome is quite different.

First, young people are not always liberal (or socialist). Mounk, in fact, provides an example when he writes that "in France...Marine Le Pen's National Front does much better among the young than the old." The same can be said about Hungary, Poland, and Slovakia and, to a lesser extent, Germany.

Closer to home, a longitudinal analysis of survey data by political scientist, Patrick Fisher, indicates that, "In every presidential election from 1960-1976 the 18-34 year old age group was the most Democratic age group, but in the presidential electionsfrom 1980-1992 the 18-34 age group was the most Republican age group. Especially notable is the strong preference of younger voters for Ronald Reagan, which dispels the stereotype that younger voters tend to support relatively younger candidates." It also refutes the canard that younger voters always support liberals and Democrats.

But, could it be that those "younger voters" who start out as liberals or Democrats eventually turn to the right as they age? In most cases, the answer is no. A classic example is the GI or Greatest Generation, those Americans born in the first quarter of the 20th century who lived through and overcame the Great Depression and then won World War II. That generation voted heavily for Democrats starting with Franklin D. Roosevelt, awarding him 85% of their vote in 1932. (Generations, Strauss and Howe, p. 262) As late as 2004, the last measurable segment of GI generation voters gave Democrat John Kerry a majority of their votes.

So, there is no clear tendency for voters to move right or left or toward either party as they age, as Mounk suggested. Instead, as Professor Fisher indicates, due to differing socio-economic conditions experienced during their formative years (generational theorists would add differing parental child rearing practices to the mix), "different generations have distinct political leanings that they will tend to maintain over their lifetime."

In fact, there is data from Pew Research demonstrating that there is a direct relationship between the identity of the president when voters were 18 years old and the partisanship of those voters in the elections that followed. The perceived success or popularity of a president during a voter's formative years influences their vote even decades later. Younger Boomers and older Gen-X'ers who came of age during the term of the popular Ronald Reagan voted disproportionately Republican in elections from 1996 to 2010. On the other hand, Boomers who were 18 during Richard Nixon's tumultuous administration have consistently cast Democratic votes in later years while Boomers and X'ers who came of age during Jimmy Carter's presidency have normally been Republican in their partisanship.

Meanwhile, in Pew's initial survey of the Trump presidency, Millennials disapproved of his performance by greater than a 2:1 (64% to 28%) margin. Even among white 18-29 year olds, 59% disapproved. A just published survey conducted by NORC at the University of Chicago similarly found that Millennials disapprove of Trump at rates ranging from 55% (whites) to 71% (African Americans). Unlike Mounk's unfounded predictions of the future voting behavior of Millennials, this data point alone suggests that Millennials' Democratic tendencies are likely to be reinforced unless the president's appeal to their generation increases significantly.

While Mounk points out that white Millennials voted for Donald Trump over Hillary Clinton by a plurality of 47% to 43% in 2016, it should be noted that the Millennial generation is not only America's largest, it is also the nation's most diverse. About 40% of all Millennials and close to half of the generation's youngest cohort are nonwhite. Around one in five have at least one immigrant parent. Latinos 18-29 voted for Clinton by a greater than 2.5:1 margin (68% to 26%). Among African-Americans in that age range the ratio of Clinton to Trump voters was nearly 10:1 (85% to 9%). That overwhelming Democratic vote among nonwhite Millennials meant that Clinton carried the entire generation handily (54% to 37%).

Party identification is an even better indicator of the deeper partisan proclivities of Millennial (and other) voters than their choice in a single election. That is because in each of the five presidential elections of the 21st century, about 90% of those who identify with a party voted for the nominee of that party. And, by 1.6:1 majority (57% to 36%) Millennials identify with or lean toward the Democratic rather than Republican party.

Yascha Mounk may be right in saying that nothing in politics is foreordained. But, in the contest to capture the loyalties of the Millennial generation and control the future of American politics, the Democratic Party continues to hold a clear advantage.