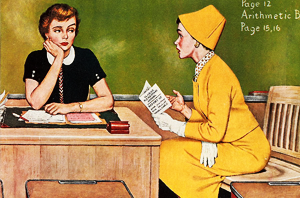 In the mid-1950s, the McGuire Sisters’ version of Johnny Mercer’s song about what happens when an irresistible force meets an immovable object made it to number five on the record charts. Their prediction, that “Something’s Gotta Give,” provides an apt description of the outcome of today’s battle between the parents of Millennials who want more say in their children’s education and the teacher unions and school district administrators who refuse to give up a smidgeon of control over the public schools they run.

One of the hottest battle fronts in the war between these two forces has been debates over whether to adopt “Parent Trigger” laws, similar to those passed in California in 2010. Such legislation empowers the majority of parents in any school district deemed to be “failing,” according to the federal No Child Left Behind standards, to essentially reconstitute the school according to parents’ desires either by turning it into a charter school or removing and replacing all current teachers and administrators.

Since 2010, Texas, Mississippi, and Louisiana have passed similar legislation and it is up for debate in major industrial states such as Michigan, Pennsylvania and New York. In Florida, the idea came within one vote of passage in the State Senate thanks to the enthusiastic support of former Florida Republican Governor, Jeb Bush. At the same time, such Democratic stalwarts as Barack Obama’s Secretary of Education, Arne Duncan, and liberal Congressman George Miller (D-CA) have expressed their strong support for the concept.

Most recently, the bi-partisan U.S. Conference of Mayors unanimously passed a resolution in support of Parent Trigger laws.  Los Angeles Mayor, Antonio Villaraigosa, chairman of both the Mayor’s Conference and the upcoming Democratic National Convention, led the charge for the resolution’s passage, aided by strong support from Democratic Mayors such as Michael Nutter of Philadelphia and Kevin Johnson of Sacramento.

None of this has softened the resistance from teacher unions, historically a bulkwark of Democratic support. Often led by unreconstructed Boomer liberals from the 1960s, they see the law’s emphasis on parental prerogatives as the ultimate threat to their control of the classroom and educational budgets. In the most recent battle, unions were able to pressure Change.org, a for profit, grass roots website “staffed by some of the most talented progressive organizers in the country,”  to bar StudentsFirst, an advocacy group run by Democrat Michelle Rhee, the former Washington D.C. School Superintendent, that supports giving parents more control over the schools their children attend, from using its website.
And when the chief press person for Parent Revolution, the non-profit that is the primary driver behind the adoption of Parent Trigger laws, was announced as the new education media spokesperson by Obama’s re-election campaign, teachers' unions threatened to withhold their support of the president.

In the long run, the implacable objections of the unions to parents having more say over the type of education their own children will fail. They will prove no match for the irresistible force of generational change that is already sweeping away existing institutional power structures in schools across the country.

One of the distinguishing characteristics of Millennials, born 1982-2003, is the intense interest their parents take in every aspect of their children’s lives. This desire to constantly hover over their offspring earned parents of older Millennials (those now in their twenties) the sobriquet, “helicopter parents.” The younger half of the Millennial Generation, which  accounts for most elementary and all secondary school students today is primarily parented by members of the more entrepreneurial Generation X (born 1965-1981). These parents replaced their Boomer predecessors’ tendency to hover and talk with a desire to take action and change bottom-line results.

Millennials are the largest, most diverse generation in American history, and many of them are now starting to have children of their own. When those children begin arriving in the nation’s schools, Millennial Generation parents will bring the same dedication that their own parents exhibited to making sure each school serves their child’s interests first.  As a result, it won’t be long before the same rights California, Mississippi, Texas, and Louisiana parents now have are given to every parent in the country. As Ben Austin, the founder of the Parent Revolution points out, “the old coalitions don’t apply here; it’s a cause that unites parents from upper-middle-class and working-class backgrounds—white, black, and Latino alike.”

The type of generational change America will experience over the next few decades   will drive the transformation of America’s educational institutions and overwhelm those who attempt to keep parents from deciding what kind of school their kids go to. When push comes to shove, something’s gotta give. And, in the end, that means that those who stand for the status quo in our nation’s schools will have to give up their traditional prerogatives and let parents choose the educational experience they think is best for their own children.