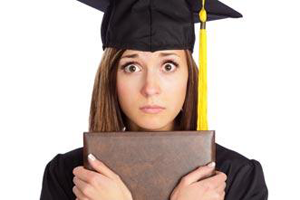 Millennials (born 1982-2003) are convinced that college is the ticket to a better life.

In today’s global economy, the country’s economic success depends on students acquiring the skills that come with the completion of two- or four-year college programs.

And, unfortunately for the nation, the percentage of students who actually graduate from college has been stagnant for the last 30 years.

More than a quarter of this year’s college freshmen will not return for a second year. Half of those enrolling in two-year college programs won’t be back for their final year either.

A recent study by CompleteCollege.org (the chart above, is courtesy of the site) found that only 60.6 percent of full time undergraduate students had obtained their degree within eight years. Part time students took even longer, with less than a quarter of them finishing their bachelor’s degree after eight years. The numbers are even lower for two-year associate degree students.

The reasons for this dismal performance are well-documented.

And that’s not all.

Despite continuing to raise tuition rates, a recent Bain & Company study found that about one-third of all US colleges are on an unsustainable financial path.

Its examination of more than 1,700 public and private nonprofit colleges found that the growth in these colleges’ debt and the rate of spending on interest payments and on plant, property, and equipment rose far faster than did spending on instruction from 2002 to 2008.

In no other industry would overhead costs be allowed to grow at this rate—executives would lose their jobs, the Bain study said, according to The Chronicle of Higher Education article about the study.

Clearly, to continue to maintain its critical role in providing the nation with the skilled workforce our economy requires, the nation’s system of higher education will have to find ways to deliver a better product at a lower cost.

Fortunately, solutions are rapidly coming into view that will win over Millennials, first as students, and then as parents of America’s next generation of students. One is the increased use of technology to both reduce the cost and increase the effectiveness of instruction.

The introduction of Massively Open Online Courses, or MOOCs, by some of the nation’s leading universities is at the leading edge of this trend. Unlike earlier versions of distance-learning, these free offerings take advantage of delivery platforms that use data-mining technologies to personalize material and analyze huge numbers of student experiences to see which approach works best.

MOOCs are still in their infancy, with a variety of universities partnering in both for-profit and nonprofit consortiums, some of which offer credit for completing a given course and some of which only issue a “statement of accomplishment” and a grade. Even though they are free, these courses provide a high-quality instructional experience and, as a result, hundreds of thousands of students have signed up for them, according to a July article in The New York Times.

In the future, many colleges may find it easier to lower their costs by granting credit for these types of courses and focusing their instructional efforts on providing the level of social interaction that is essential for real learning to take place.

One way that shows early promise for making this happen is through the adoption of the same digital technologies that have been used to create immersive, interactive experiences in games, such as World of Warcraft, or movies, such as “Avatar.”

Studies have shown very positive effects on the skill and performance of students exposed to such “serious games” in subsequent real-world situations. The experience of being engaged in these simulated environments has also been shown to produce positive effects on the individual’s or the group’s identity, an important part of Millennials’ maturation.

By adopting these new technological solutions to the cost and effectiveness of instruction, America’s system of higher education has an opportunity to make a higher quality education available to Millennials at a lower cost.

This should enable America’s next great generation to acquire the skills and knowledge the country needs for its future economic success. If it does, the nation will have found a win-win solution to its current higher education challenges—just the type of outcome Millennials prefer.