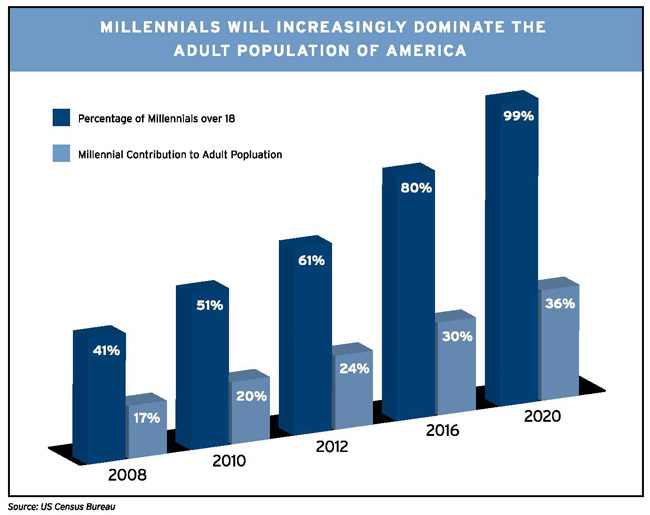 By 2020, Millennials will comprise more than one of three adult Americans. It is estimated that by 2025 they will make up as much as 75 percent of the workforce. Given their numbers, they will dominate the nation’s workplaces and permeate its corporate culture. Understanding the generation’s values offers a window into the future of the financial industry and much of corporate America.

In the Millennial era, most Americans will demonstrate a greater desire to advance the welfare of the group and be less concerned with individual success. They will be less worried about being guided in their daily decisions by software and more intrigued by the opportunities it offers. Even without any major environmental disaster, they will display a greater reverence for the environment and less interest in the acquisition of things as opposed to experiences.

It will be a world that is radically different than the one those who wield power today have grown accustomed to leading. In an era dominated by Millennial values, causes will create compatibility in the same way that the generation creates communities built around shared interests, not geographical proximity. The desire of Millennials for pragmatic action that brings results will overtake today’s emphasis on ideology and polarization as Boomers finally fade from the scene. The distinctive and widely shared attitudes and beliefs of this generation will slowly, but surely, reshape corporations in its image and end the confrontational and bottom-line oriented world that Boomers and Gen-X’ers have created. This cultural shift will be felt in all aspects of the American economy from its marketplaces to its workforce and from its board rooms to the daily decisions of its CEOs.

The power of the Millennial Generation was first felt at the beginning of this century in consumer markets, especially those such as entertainment and fashion that are focused on younger customers. Then, in 2008 and 2012, the Millennial wave of disruption entered the world of politics, with the generation playing a critical role in President Obama’s election and re-election. More recently, Millennials have begun  to transform the world of work. Now, as the oldest members of the generation enter their thirties, they will have the ability to meld their considerable political clout with an increasing amount of economic power.

Millennials don’t intrinsically dislike American business and believe corporations, including those on Wall Street, make an important contribution to the American economy. But theirs is  a generation more prepared than older generations to regulate economic entities which they perceive  not to contribute  to the greater good. According to Pew’s research, a plurality of Millennials, unlike older generations, mostly disagree with the statement that “government regulation of business usually does more harm than good.”

If the culture of Wall Street becomes become more and more isolated from the beliefs and values of America’s largest adult generation, it is likely to be disrupted by Millennials’ desire to use government’s involvement in the economy to create a fairer and more equitable society. Ultimately, the generation’s group orientation, its preference for win/win solutions, its deep sense of fairness and its desire that everyone in the group share benefits as equally as possible will lead Millennials to support even more regulation beyond the prescriptions stemming from  the post-2008 crash financial reform legislation that Wall Street so thoroughly dislikes.

Furthermore, demographic trends make it clear that over the next decade increasingly greater numbers of Millennials will be elected to office, giving them the power to enact more laws that can change how corporations are governed and what responsibilities those entities owe to all of their stakeholders. When that happens the entire edifice of corporate governance constructed on the idea of only maximizing shareholder value will come crashing down and a new foundation for American corporations, built on trust and the values and beliefs of Millennials will arise in its place.

Those companies that dedicate their future to changing the world for the better and find ways to make it happen, will be rewarded with the loyalty of Millennials as customers, workers and investors for decades to come. Those that choose to hang on to outdated cultures and misplaced priorities are likely to lose the loyalties of the Millennial generation and, with it, their economic relevance.