Millennial generation could kill the NFL 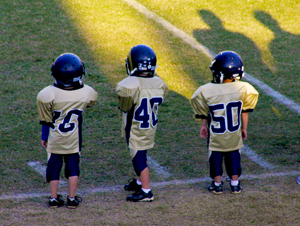 Many protective mothers and fathers of Millennials aren't allowing their kids to play tackle football because of health risks. These attitudes could close the NFL’s pipeline to many talented players. But these concerns also have the potential to change the violent NFL culture for the better.

The emergence of the Millennial generation poses an existential threat to the future of the National Football League.

Professional football has been America’s favorite spectator sport since 1972 when baby boomers became the most important TV audience demographic. Steve Sabol, the genius behind NFL Films that helped to popularize the NFL in the 1960s, captured the drama and danger of pro football with his slow motion films of big violent hits backed by stirring music.

Pro football, depicted by Mr. Sabol as a confrontation between good and evil in which there can be only one winner, matched the values of baby boomers a half century ago. But this focus is not as appealing to the Millennial generation with its focus on win-win solutions and an instinct for avoiding confrontation.

Furthermore, out of concern for the future health of their children, many protective mothers and fathers of Millennials are deciding their kids should not play tackle football at all. These attitudes could close the NFL’s pipeline to many talented players within the coming decade. But these concerns also have the potential to change NFL culture for the better.

Millennials (young people 9-30 years old) were reared by their parents in a highly sheltered and protected manner. The generation’s arrival was signaled by “baby on board” bumper stickers and AMBER Alerts, major child protection legislation and “helicopter parents.”

Because of the way they were reared, Millennials are the most risk averse in recent American history. Concerned about the safety of their “special” children, the parents of many Millennials have demonstrated a strikingly fearful reaction to a series of reports about the devastating impact playing in the NFL has had on many former players.

According to GamesOver.org, a group “dedicated to serving and meeting the transitional needs of players when they leave the game,” 65 percent of NFL players retire with permanent injuries, while the suicide rate of former NFL players is six times the national average, possibly due in part to a brain disorder that researchers say impacts those who have suffered multiple concussions.

So far, more than 3,000 former NFL players have filed more than 100 lawsuits against the league for concussion-related conditions. If they are combined in a single class action, these suits could cost the NFL millions of dollars and possibly threaten it with bankruptcy. Moreover, in each of the past two seasons about 15 percent of those on NFL rosters (270 in 2010 and 266 in 2011) received concussions. And already in the first month of this season, at least two starting quarterbacks have been sidelined by concussions.

The NFL has taken note of the threat and is working to reduce the impact of concussion-related injuries through improved equipment, especially helmets that provide enhanced protection. It is also working toward better coaching that teaches safer tackling and blocking techniques. And the league is developing new rules or stronger enforcement of existing ones that prohibit or reduce blows to the head.

But there are some who doubt the effectiveness of those efforts, or even feel that they are incompatible with the brand of a sport that is based on vigorous contact. Still, the NFL Players’ Association has strongly endorsed them.These changes to improve player safety need to be made quickly if the NFL is to avoid another potentially more serious challenge to its future – the unwillingness of the parents of Millennials to allow their sons to play football.

Most shocking, a number of current and former NFL players – among them quarterbacks Terry Bradshaw, Kurt Warner, Drew Brees, and Troy Aikman and linebacker Bart Scott, famed for his hard-hitting style – say that, due to its dangers, they would bar their sons from playing the game in which they earned fame and fortune.

Perspectives like this have the potential to hamper or even halt participation in the programs that develop future NFL players. Because, other than a Canadian variation, American-style football is only played in the United States, there are no replacement athletes in the pipeline for football from foreign countries as there are for other professional sports.

Millennials were reared by their parents to be an egalitarian, group-oriented cohort, one that believes the welfare and success of individuals is best assured by maximizing the welfare and success of the entire group. It’s no coincidence, then, that high schools and colleges prohibited the taunting of opponents and exaggerated celebration of individual achievements on the gridiron just as Millennials were beginning to play football at those levels.

Perhaps Millennials will bring their group-oriented values to the NFL, producing a kinder, gentler version of pro football just in time to save the league from its boomer-dominated approach.

If so, the version of football that Steve Sabol’s films made so popular a half century ago will become a thing of the past. But, if the NFL doesn’t take the steps necessary to convince Millennials and their parents that their game is safe to play, it will take much more than brillian