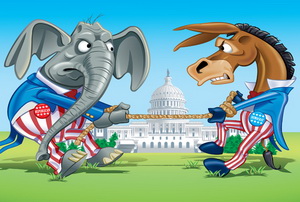 An August national survey of nearly 3,300 Americans between the ages 18 and 85, conducted by research company Frank N. Magid Associates, details the current composition of the two major political party coalitions that are more distinct from one another than at any other time in the past 50 years--perhaps even since the Great Depression.

In many democracies, political parties represent particular interests: labor or business, specific religions, ethnicities, or regions. In the United States, with its continental dimensions, varied population, and a constitutional system designed to disperse governing power, political parties are historically, and still remain, coalitions of various social groups. No party monopolizes the members of any one demographic, and each party contains at least some representation from all segments of the population.

But as new generations with new concerns emerged in the midst of the racial and lifestyle changes of the 1960s, the New Deal coalition fell apart. It was supplanted by a Republican coalition that increasingly added two former components of the Democratic coalition—the white South and working-class whites—to the upper-income white residents of suburbs and small towns outside of the South that had been the core of the GOP in the previous era. The new Republican coalition dominated national elections almost as long and shaped public policy almost as profoundly as had the New Deal coalition that it superseded.

But these party coalitions are formed in a nation with a constantly changing economy, political process, and demographic makeup and, consequently, are not permanent. The Magid display very clearly the sharp differences between today’s party coalitions.

The majority of voters who identify with or lean to the Republican Party are males and members of America’s two oldest generations—baby boomers, those in their 50s to mid-60s; and silents or seniors--who together make up 53 percent of Republicans.

The Democratic coalition is far different. A majority of Democratic identifiers are women and from the country’s two youngest generations—Millennials, voters in their 20s; and Generation X, people in their 30s and 40s, who in total make up 57 percent of Democrats. Forty-one percent of all Democrats and 45 percent of strong Democrats are nonwhite with about equal numbers of African-Americans and Hispanics.

Nearly half of Democrats live in the Northeast and West, and a disproportionately large number—70 percent—live in big cities or suburbs. Just half are married. Only 57 percent are Christian, and about one in five are either of non-Christian denominations or unaffiliated with any faith. Just 21 percent of Democrats attend a religious service weekly. Slightly more, 24 percent, never do.

The Democratic coalition is, however, more diverse ideologically than the Republican: While a plurality, 42 percent, are either self-identified liberals or progressives, nearly as many, 35 percent, say they are politically moderate.

The United States is undergoing major demographic, economic, and societal changes that have led to this new alignment and will continue to shape the two parties' coalitions. Some of the change—the Great Recession, the deepest and longest economic downturn since the 1930s—was severe and occurred almost overnight.

Other changes, among them the transformation of the nation from a white to nonwhite majority, the emergence of America’s largest and most diverse generation, the Millennials, and a makeover of the U.S. economy, are taking place more slowly, but equally profoundly.

To hold together and expand their coalitions, both parties will need to formulate a new “civic ethos” that addresses the fundamental question of what the size and scope of government should be in this new era.

Both President Obama and Mitt Romney recognize this and have used their respective party’s conventions to articulate distinctly different visions and values that they believe should shape and guide America’s politics and government in the coming years.
The party that enunciates this new civic ethos in a way that enables it to build a majority electoral and governing coalition is likely to dominate U.S. politics for the next four or five decades.