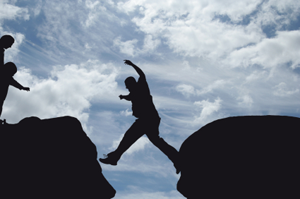 In 1964, Jack Weinberger, a leader of the Berkeley Free Speech Movement that kicked off a decade of student protests, famously proclaimed that his age cohort should “never trust anyone over 30.” A recent survey by communications research and consulting firm Frank N. Magid Associates suggests that a gap just as deep exists today between younger and older generations. While the gap may not be as visible as in the 1960s, it still has the potential to be every bit as divisive.

Magid asked a national sample of 3,150 Americans, ages 16 to 66, if they were “least likely to get along with someone of the opposite sex, a different racial background, or a different generation (much older or younger).”

Given their high degree of racial tolerance and wholesale rejection of traditional gender roles, it isn’t surprising that the youngest generation in Magid’s sample, Millennials (those in their teens or twenties), were more likely than older persons to cite generational disagreements and less likely to expect disagreements across racial or gender lines. This was especially true of the teenagers in the survey.

While Magid’s question focused on interpersonal relationships, there is already evidence that the generational divisions it uncovered will be of increasingly broad societal importance in the years ahead.

In the 2008 presidential election, for example, Millennials supported Barack Obama over John McCain by greater than 2-to-1 (66 percent to 32 percent), while the next two older cohorts (Generation X and boomers) divided their votes about evenly between the two candidates; a majority of senior citizens supported McCain.

According to the latest polls, Millennials support Obama by about the same 2-to-1 margin as in 2008, while Gen-X’ers and boomers are evenly split. Seniors prefer the Republican candidate by an even greater margin than they did four years ago.

Indeed, Pew’s latest American Values Survey attributes much of the increasing polarization of U.S. politics to the “strong generational characteristics of the Millennial generation compared with” older generations. This makes it likely that the same large generational split will occur again this November.

But the political differences are only one example of a large-scale division in attitudes and behavior between Millennials and their elders. From the country’s houses of worship to its major-league ballparks and from its homes to its workplaces, Millennials have a very different outlook on society than older Americans.

So far this generational division has not had the acrimony of the generation gap from the 1960s. In large part that’s because Millennials, unlike the boomers of 50 years ago, are not rebellious by nature. If anything, Millennials are unfailingly polite. Their parents, whom they actually like, have taught them to seek win-win solutions to controversial issues.

However, as demographer Joel Kotkin indicates, many current public policies work to the benefit of older generations at the expense of younger ones. Kotkin points out that U.S. politicians of both the right and left promote “governmental policies [that] continue to favor boomers and seniors over the young.”

In Great Britain, young people have formed an organization, the Intergenerational Foundation, to publicize and begin to redress their grievances. The IF website features postings such as “Intergenerational Practice vs. Intergenerational Justice” and “Sharing the cake—an Intergenerational Dilemma” that clearly express the organization’s concerns.
Perhaps American Millennials will not form groups that are so explicitly focused on their own cohort or take to the streets as boomers did five decades ago. But that does not mean that they will do nothing.

Unlike many European countries with small youth populations, Millennials have the numbers to produce more equitable public policies. At 95 million, Millennials are the largest American generation ever.

By 2020 they will comprise more than one in three eligible voters. Sooner or later, those numbers, and the unity of belief that the millennial generation has so far brought to politics, will allow the generation to reshape the United States, first as voters and then as the nation’s leaders.

The way in which boomers and seniors react to the growing presence of Millennials, and the younger generation’s distinctive beliefs, will determine how difficult the transition from the old to the new America will be.