America's young 2012 Olympians are its future 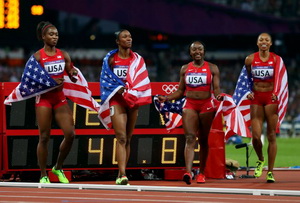 Gymnast Gabby Douglas, runner Galen Rupp, the women's 400-meter relay team: America got a clear glimpse of its bright future at the 2012 Olympics as 'Millennial Generation' Olympians exhibited their unique take on the country’s traditional pride, diversity, and can-do spirit.

Millennials (Americans born in 1982 through 2003) comprised the bulk of the US team that averaged 27 years of age. Their generation’s focus on the success of the larger group was evident in these ways during the competition:

Patriotism without jingoism. Millennials’ pride in their country, without excessive nationalism, was constantly on display in London. A 2011 Pew survey indicated that 70 percent of Millennials describe themselves as “very patriotic,” but only a third said that the United States is the “greatest country in the world.” That contrasts strikingly with two-thirds of senior citizens and half of baby boomers who think America is the best.

Each member of the gold-medal winning US women’s 400-meter relay team wrapped herself in her own American flag and beamed at the scoreboard showing the team’s world-record time, each expressing her pride in competing and winning for the USA. The contrast with the two American Baby Boomer medal winners in the 1968 Mexico City Olympics, who raised their fists in a black-power salute as the national anthem played, couldn’t have been greater.

But, Millennial pride-in-country rarely, if ever, became bragging jingoism when Americans won or sour grapes when they lost. Instead, US athletes seemed to appreciate and applaud the efforts of their competitors. 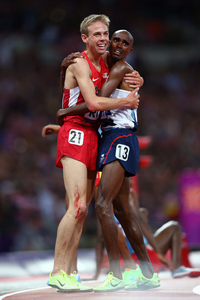 No story better demonstrates the willingness of this age group to cheer for their competitors than that of the men’s 10,000-meter gold- and silver-medal winners, Britain’s Mo Farah and America’s  Galen Rupp. The two trained together and, as Mr. Rupp put it, are “brothers.” To Rupp, a victory for his British brother was as good as one for himself.

Diversity in more than name only. The Millennial Generation is the most diverse in US history. About 40 percent are nonwhite. This diversity was reflected in America’s Olympic team as well. Between 30 and 40 team members were foreign born and many were the children of immigrants.

Most dramatically, Leonel Manzano, who won America’s first medal in the 1,500-meter race since 1968, is the son of an undocumented Mexican farm worker. 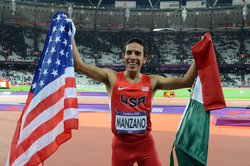 A US citizen, Mr. Manzano waved both American and Mexican flags to celebrate the two strands of his heritage.

African-American Gabby Douglas became the first black to win a gold medal in gymnastics. She did so in typically diverse Millennial fashion, leaving her Virginia Beach, Va., home to live with a white family in Des Moines so that she could train with a Chinese-American coach. 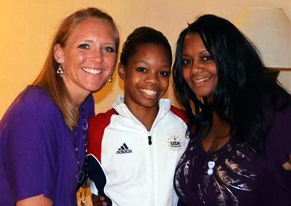 Girls rule. In 1972, Congress enacted and President Nixon signed Title IX, guaranteeing that women would be treated equally in any educational program receiving federal assistance, including sports.
Never has the impact of Title IX been clearer than in the 2012 Olympics. For the first time, more women than men (281 to 271) represented the US at the Olympic Games. And, US women won almost twice as many gold and total medals than the men.

Participating and doing one’s best is winning. Critics of the Millennial Generation complain that these young people were reared by their parents to expect a trophy just for showing up; they worry that such an approach will produce soft adults who will wilt in the face of stiff competition.

The success of the Americans in the pressure cooker of the London Games should dispel such fears. But it was also clear that the way they were raised made Millennials appreciate even more the Olympic creed that participating and doing one’s best is its own reward. With few exceptions, Millennial athletes regarded winning a silver or bronze medal or just beating their own personal best as almost as much of a reason to celebrate as winning a gold medal.

Millennials are an upbeat, team-oriented, high achieving, can-do generation. Their belief that it’s a victory just to play the game, work hard, and do your best will be a gift that keeps on giving for America as this generation  comes to dominate the adult population.

An April 2012 Pew survey indicated that, even confronted with the impact of the Great Recession, Millennials were significantly more likely than older generations to believe that “as Americans we can always find a way to solve our problems and get what we want.”

That optimism, determination, and achievement were on ample display in London during the past two weeks. America is fortunate that this generation moving up to enter far bigger arenas where the stakes for the nation are even higher.