Women, Minorities, and Millennials Will Determine America’s Next Civic Ethos 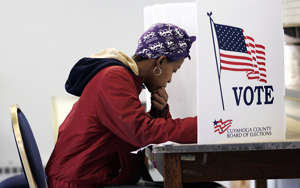 On one level, the 2012 presidential election is a battle between two distinct party coalitions: a Republican coalition heavily centered on males, people over 50—especially seniors—and whites; and a Democratic coalition built around women, younger voters—especially Millennials—and minorities. But it is also a dispute over policy and program, because the party that develops a winning majority coalition will also determine America’s new civic ethos and answer the fundamental question of U.S. politics: What should be the size and scope of the nation’s government?

An August national survey of nearly 3,300 Americans ages 18-85, conducted by Frank N. Magid Associates, suggests that President Obama’s reelection prospects are underpinned by a distinctive demographic voter coalition, whose beliefs will also shape America’s next civic ethos in  the years ahead.

According to Magid, a clear majority of Americans favor “a government that actively tries to solve the problems facing society and the economy,” while only 31 percent prefer “a government that stays out of society and the economy to the greatest extent possible.”
Since the New Deal, the belief in an activist government has become so ingrained in the American political psyche that a majority of most major demographics now support this concept. Still, not surprisingly, support for governmental activism is greatest among key demographics that also make up the core of the Democratic Party’s 21st century coalition: women (55 percent), minorities (59 percent), and Millennials (55 percent).

It is a bit lower within groups that comprise a disproportionate share of the GOP coalition: men (50 percent), whites (50 percent), and seniors (48 percent).

The Magid survey indicates that a clear plurality, 47 percent, believes that “the best way to protect America’s national security is through building strong alliances with other nations” rather than by “relying primarily on its military strength” (37 percent).

Once again, the demographics that comprise the core of the emerging Democratic Party coalition also favor the position with the greatest support among voters. Majorities of women, Millennials, and minorities all agree that U.S. foreign policy should rely on alliance building.

By contrast, groups that tend toward the Republican coalition more strongly favor relying on U.S. military strength as the basis of the country’s foreign policy: men (41 percent), seniors (43 percent), and whites (39 percent).

As a result, a majority of Democratic identifiers favor an approach focused on alliance building, while most Republican identifiers prefer a foreign policy centered on U.S. military strength.

The Magid survey indicates that close to half of the electorate believes that “the best policy is to ensure that all Americans have at least a basic standard of living and level of income, even if that increases government spending,” while about one-third say that “the best policy is to let each person get along economically on his or her own, even if that means some people have a lot more than others.”

Majorities within left-leaning groups such as women, Millennials, and minorities believe that government should guarantee at least a minimal level of economic well-being. Less than half of groups inclined toward the GOP such as men, seniors, and whites concur.

As a result, perhaps more than any other, this issue separates those who identify with each of the parties: two-thirds of Democrats believe that government should provide a basic standard of living to all Americans, while 59 percent of Republicans are in favor, instead, of allowing each person to get along on his own.

On Nov. 6, voters will not only elect a president and decide which party controls Congress. They will also determine anew just how and to whose benefit government will intervene in the economy and how the country will interact with the rest of the world. While it is too early to know the details of the nation’s new civic ethos, recent survey research suggests that these policy issues will be decided based the beliefs of an emerging new majority coalition in American politics centered on women, minorities, and Millennials.
Politics
Do you like this post?
Tweet