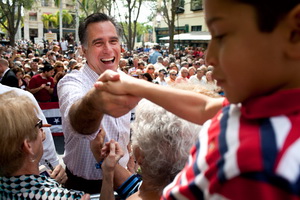 One of the more curious developments in American politics over the last two decades is the political malpractice of Republicans in dealing with Hispanic-Americans.  Indeed, it now appears that the 2012 election may well be determined by the share of the Latino vote that Governor Mitt Romney is able to keep from falling into President Barack Obama’s column.

According to the Investor’s Business Daily tracking poll, Hispanics prefer Barack Obama by a greater than 2:1 margin (61% to 29% on October 25).  Hispanic-Americans have tilted toward the Democrats for decades, so it is hard to blame the Republican Party’s current predicament on just the political tactics of this year’s campaign.

But unlike the African-American vote since the 1960s, which has remained rock solid Democratic, history indicates that on occasion the GOP has competed for and won a significant share of the Latino vote.  Hispanics tend to be family oriented and somewhat entrepreneurial, which should make them potential Republicans.

But deliberate, conscious decisions by Republican leaders focused on the short run gains from immigrant bashing have done severe damage to the long term health of their party. Attacks on immigrants have caused Hispanics to desert the GOP in droves, particularly in the two most recent presidential elections. And, because the Latino population is relatively youthful, if this concern is not dealt with, it may become even more acute for the Republican Party in the years ahead. Among Millennials, America’s youngest adult generation, about one in five is Latino as compared with about one in ten among Baby Boomers and one in twenty among seniors. Among the even younger Pluralist generation (children 10 years old and younger) between a quarter and 30% are Hispanic. Between these two up-and-coming generations, it’s likely that Hispanics will represent nearly 30% of the nation’s population within the next few decades. This suggests that the Republican Party has little hope of winning national elections in the future unless it reverses its current policies to bring them more in alignment with the attitudes and beliefs of this key voter group.

Some have estimated that Ronald Reagan won 37% of the Hispanic vote in his successful 1984 re-election campaign.  Since then the presence of Hispanic voters in the electorate has grown by 400%, but the Republican share of their votes has risen above the level at which Latinos supported Reagan only once. That occurred in 2004 when Karl Rove’s strategic focus on Latinos enabled President George W. Bush’s re-election effort to win upwards of 40% of the Hispanic vote. In every other presidential election since 1984, Republicans have struggled to win the votes of even one out of three Hispanics.

Recent data from Pew Research demonstrates that the Hispanic rejection of the GOP was not pre-ordained. Their recent survey showed 70% of Hispanics now identify themselves as Democrats,  but that this percentage falls to just 52% among Evangelical Hispanics, a fast growing  group whose cultural attitudes are more conservative than those of the overall Hispanic population. In 2004, President Bush actually won a majority of the Hispanic Protestant vote even as his support among Catholic Hispanics failed to improve from his showing in 2000.

Catholic Hispanics, who comprise about 60% of all Latinos, are more likely to vote based on perceived loyalties to their social-economic class than their attitudes on social issues. Bertha Gallegos, who is Catholic, pro-life and the Vice President of the Colorado Society of Hispanic Genealogy, a nonprofit and nonpartisan organization that researches the state’s Latino history, typifies the attitude among members of her faith toward the Republican Party. “I still don’t get how Hispanics can be Republicans. The only time they’re nice to us is when they want our vote. Republicans work to make the rich richer. They don’t care about the poor.”

Since the virulently anti-immigrant campaign in favor of Proposition 187 in California that attempted to bar immigrant access to basic social services the Republicans have continued to play exactly the wrong tune for Hispanics.  In this year’s Republican primary, there was much emphasis on removing undocumented immigrants from American soil through self-deportation or other more draconian means, Republicans have allowed economic resentment and cultural fears to get in the way of positive voter outreach to America’s fastest growing minority population. After all, many Latino legal residents and citizens also have relatives and friends who are undocumented.

Yet studies as far back as the 2000 presidential election have shown that when properly engaged, Hispanics have an open mind on which party deserves their support. Latinos in that election were statistically more likely to support Bush over Gore if they were contacted by Latino rather than Anglo Republicans. Clearly the election in 2010 of Latino Republican governors, Susana Martinez of New Mexico and Brian Sandoval of Nevada, suggests that the community remains open to such appeals in the future.

Before such efforts can be successful however, Republicans will have to reverse course on their attitudes toward comprehensive immigration reform, a cause which traces its historical lineage to Ronald Reagan and which was a key part of Karl Rove’s re-election strategy for George W. Bush. Only when the Republican Party’s message changes will their messengers deserve and be able to gain a respectful hearing from America’s Hispanics.
Politics
Do you like this post?
Tweet