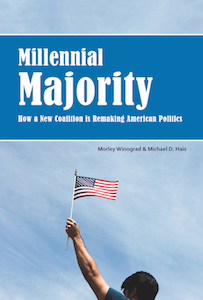 Not since the Vietnam War and the presidential primary campaigns of 1968 and 1972, has America seen as wide a gap in voting behavior between older and younger voters within a political party as the Democrats are experiencing this year. Healing that rift becomes the primary challenge for Hillary Clinton whose general election victory could very well depend on winning over millennials (born 1982-2003) to her side.

The youngest adult millennials, those between 18 and 29 years of age, have voted for Senator Bernie Sanders in Democratic primaries in states across the country by margins of 3 or 4 to1, a level of support that matches or exceeds the size of the margins President Obama enjoyed among millennials in his two campaigns. According to the Harvard Institute of Politics’ most recent poll, by a narrow 30 percent to 26 percent margin, women in this segment of the generation are even more likely to believe that Bernie Sanders would do a better job than Hillary Clinton in “improving women’s lives in the U.S.” But Clinton is much more competitive among millennials 30 to 35 old as they settle down and begin to form families. And among voters over 45, Secretary Clinton has been able to roll up margins over Sanders at levels comparable, if slightly lower, than her opponent’s advantage among young people.

There’s little doubt that Clinton’s Republican opponent, Donald Trump, and his campaign are well aware of this generational split within the Democratic Party and would like to exploit it by making their own appeal to millennials. But, Clinton and the Democrats should have the edge in any battle for the support of America’s youngest voters. Millennials identify as Democrats over Republican by a margin of about 1.5 to 1 and a majority of them have favorable attitudes toward the Democratic Party and negative impressions of the GOP. So how can Hillary Clinton begin to close the generation gap within her own party in time for the general election? The best way for her to undertake that task is not to try and speak directly to millennials while the primary campaign is still under way, but to talk to her own core supporters, those over 45 years of age, about the need to forge a permanent inter-generational alliance that could cement Democratic national political dominance for decades to come.

Her dialogue with her supporters must begin by talking about what is right about millennials. Older voters, millennials’ parents and grandparents, have shaped the most tolerant generation in America’s history. The votes of millennials enabled the country to elect its first African-American president in 2008—and then to re-elect President Obama in 2012. The millennial generation’s determination to eliminate discrimination in any form not only led to Barack Obama’s election, it has provided the momentum for our country’s new attitudes toward members of the LBGT community, immigrants, and women’s rights—all causes Secretary Clinton supports.

Millennials are also the most connected generation in America, an attribute that Hillary Clinton can speak to from her own experience as Secretary of State. During her tenure in that office she added social media to America’s arsenal of soft power in Latin America and the Middle East. She could talk to her peers about how she envisions millennials using these new tools to establish relationships around the world that can lead to a more peaceful and inclusive future.

There are other aspects of the millennial generation that Hillary Clinton could use the bully pulpit of a presidential campaign to highlight. Millennials are the biggest generation in American history. They are simultaneously very demographically diverse and attitudinally unified. Forty percent of them are non-white and one out of five have an immigrant parent. Their numbers mean that they will shape American society and its politics for decades to come and many of their beliefs provide fertile ground for coalition building both within the Democratic party and, in some surprising ways, across party lines.

Of course, for the generation’s commitment to community and consensus to ensure that our political behavior lives up to America’s highest ideals, millennials also have to make their presence felt in the coming elections. In November, the generation will comprise about 30 percent of the electorate, a greater percentage than baby boomers will likely contribute. If she has any hope of motivating them to turn out and vote for her in November, Clinton must also pay particular attention to the deliberations of the convention’s platform committee to ensure it addresses the generation’s primary concern, the cost of a college education.

She has already spoken out forcefully on the need to lift the burden of student debt from this generation so they can afford to start their own families and get on with their lives the way older generations were able to do when they graduated from school. She has endorsed, and the Democratic Party platform should underline, the importance of allowing millennials to refinance their student debt to lower the amount of their monthly payments, just as older generations have been able to do with their home mortgage. And for those whose debts were incurred because of unscrupulous lenders or schools, the platform ought to commit to providing them a way to have those debts forgiven entirely.

Even more important, the Democratic platform will need to advocate for programs that will end this generational scourge forever. Older generations didn’t have to borrow money to go to high school and millennials and the generations that come after them should be able to get their higher education debt free, because that’s the level of education they—and America—will need to be successful both in today’s economy and in the years ahead.

There is a direct economic connection between these millennial specific policy positions and the concerns of Clinton’s older supporters. The earnings of millennials are the best guarantee that Social Security and Medicare benefits will not have to be cut for boomers and Gen-X’ers in the future. In addition, the desire of millennials to find work with both a social purpose and a living wage should lead to equal pay for equal work; paid child care leave for fathers as well as mothers; and companies committed to their country and communities, not just the bottom line. The entire country will benefit from the kinder, fairer economy millennials will create.

In addition to making it clear to older Americans that they have common cause with the millennial generation, Clinton’s leadership skills can be demonstrated by taking the lead in holding out the hands of her generation in friendship and support across the generational divide. Combined with her own generation’s wisdom borne from experience, such an alliance would ensure not only a Democratic victory in November but America’s continued greatness in the 21st Century.