Millennials Have the Antidote for the Country's Fear, Uncertainty and Doubt 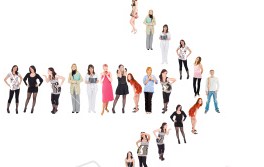 America is about to enter a presidential campaign that promises to be filled with divisive rhetoric and sharp differences over which direction the nominees want to take the country. This will be the fourth time in American history that the country has been sharply divided over the question of what the size and scope of government should be. Each time the issue was propelled by vast differences in beliefs between generations that caused the country to experience long periods of Fear, Uncertainty and Doubt (FUD), before ultimately resolving the issue in accord with the ideas and beliefs of a new generation.

Every eighty years America engages in this rancorous, sometimes violent, debate about our civic ethos.

The first occurred during and after the Revolutionary War and resulted in the most fundamental documents of our democracy: the Declaration of Independence, the Constitution, and the Bill of Rights.

The second took place during the Civil War. The 13th, 14th, and 15th Amendments codified the outcome of that debate —- this time in favor of the federal government asserting its power over state laws when it came to fundamental questions of personal liberty and civil rights.  It took the Civil War and a massive increase in Washington’s power to accomplish the end of slavery, although it would be another century until the rights of freedom and equality were fully extended to African-Americans.

And in the 1930s, the economic deprivations experienced by most Americans from the excesses of the Industrial Revolution, and the collapse of corporate capitalism, led to support for a “New Deal” for the forgotten man that placed the responsibility for economic growth and opportunity squarely on the federal government. The government demanded by the GI Generation (born 1901-1924) greatly surpassed the conventional views of earlier generations.

In each case, the resolution of these debates depended on the emergence of a rising, young civic-oriented generation that thought the nation’s dominant political belief system   should contain a strong role for government, overturning the more conservative and limited-government views of the older generations then in power.

Now, as previously, the highly charged ideological arguments on both sides of the issue generate great agitation and anger among older generations, especially Baby Boomers, who have driven our political life towards ever wider polarization. As a result, the resolution of today’s debate over the nation’s civic ethos is not likely to come from older Americans who seem incapable of and unwilling to compromise their deeply held values and beliefs.

This time around, the largest generation in American history, Millennials, (born 1982- 2003), that  will comprise more than one in three adult Americans by the end of this decade, are destined to play a decisive role in finding a consensus answer to this critical question.   If the United States is to emerge from this most recent period of FUD, it will have to look to the newest civic-oriented generation, Millennials, for both the behavior and the ideas that will bridge the current ideological divide and spur the country into making the changes necessary to succeed in the future.

Millennials believe that collective action, most often at the local level, is the best way to solve national problems. Using social media, Millennials are organizing groups like the Roosevelt Institute’s Campus Network, to present a very different vision of America’s future. In this Millennialist future, the idea of top down solutions developed by experts in closed discussions will give way to bottom up, action-oriented movements. This will topple institutions as dramatically as Napster upended the recording industry, or the Arab Spring changed the Middle East.  Just as their parents set the rules within which Millennials were free to exercise their creative energies when they were growing up, the new generation will continue to look to the federal government to set national goals or guidelines, as has long been the view of Boomer progressives.   However, the way in which these guidelines are implemented will not be determined in remote and opaque bureaucracies, but by individuals in local communities across the country. In this way, Millennials will embrace progressive values, but with approaches that may be welcomed by many conservatives.

In the midst of the country’s current period of FUD, it is easy to despair that the nation will be unable to resolve its divisions and come to consensus about a new civic ethos. But throughout its history, when America has been equally fearful of the future, a new civic generation has risen to foster the necessary transition. In the end, this emerging generation served both itself and the country well. Now it is the Millennial Generation’s turn to serve the nation and move America to a less fearful and less divided future.
Join the discussion
Tweets by @MikeAndMorley