Service, Inclusion Are Paths to Salvation for Religion in the Millennial Era 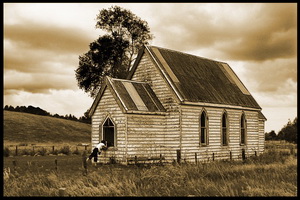 A recent Pew survey described an America that is more religiously diverse and less religiously observant than at any time in its history. In the two most publicized findings, Pew pointed out that for the first time ever, the number of Protestants in the U.S. population fell to less than half, while one in five Americans claimed no religious affiliation.

The implications of this change will be felt widely across U.S. politics, culture, and--based on Garrison Keillor’s tongue-in-cheek reference to the Pew research (“If you are not Lutheran, how will you get casserole?”)--even its eating habits. But nowhere will they be felt more strongly than by the nation's religious institutions.

Churches, synagogues, mosques, and temples will have to develop strategies for coping with the increasing religious diversity and decreasing willingness of Americans to affiliate with a faith, if those institutions are to prosper or even survive in the decades ahead. And because the changes in America’s religious landscape are being driven by the millennial generation (born between 1982 and 2003), those strategies will have to be focused on the nation’s youngest adults if they are to have any chance of success.

Millennials are almost twice as likely to be unaffiliated with a faith (30 percent compared with 17 percent for older generations), according to the April 2012 Pew values survey.

Some might argue that if the country’s religious organizations only wait long enough, millennials will lose their youthful doubt and disbelief and seek out a faith. But, just as people are not invariably liberal in politics when they are young only to become conservative as they age, neither are they invariably skeptics about religion in their youth who convert to becoming believers in middle and old age. In fact, the opposite is the case.

According to Pew tracking surveys, millennials are twice as likely to be unaffiliated with a specific faith as were baby boomers in the 1970s when they were the age millennials are today. Similarly, millennials are one and one half times more likely to be unaffiliated than members of Generation X in the 1990s were when that generation was the nation’s twenty- and thirtysomethings. Moreover, Pew’s most recent research indicates that over the past five years, the lack of religious affiliation has actually increased slightly among Generation X-ers and Boomers.

While playing a waiting game is not likely to be fruitful for America’s denominations in eventually enlisting unaffiliated millennials, taking a more proactive stance that reflects the values of the generation could be. According to generational theorists, the millennial generation is a group-oriented civic generation, an archetype that is tolerant of diversity and focused on fixing society.

Those traits are evident in both the attitudes and behavior of millennials. Pew surveys indicate that solid majorities of millennials accept gay marriage, interracial marriage, and gay couples raising children. A National Journal survey reports that six in 10 white millennials said they had at least some neighbors of other races and two-thirds had interracial friends. The number of millennials who have neighbors and friends of different religions is undoubtedly even higher.

Millennials are also busy making things better for their community, their nation, and the world. In 2009, for example, 93 percent of those entering college had performed community service in high school and half expected to do so in college, while 35 percent of adult millennials continued their volunteer activities after completing their education. In that year, applications by millennials to the Peace Corps and Teach for America rose more than 40 percent from 2008.

Pew’s research indicates that large majorities of the disproportionately millennial religiously unaffiliated believe churches and religious organizations play a positive role in bringing people together and strengthening community bonds (78 percent) and in helping the poor and needy (77 percent).

Adopting a strategy that is based on those perceptions and is focused on the elements of its belief structure that emphasize service and inclusion rather than doctrine and exclusion could be the path to salvation for American religion in the millennial era.

While most religions believe their doctrines and practices to be eternal verities, all denominations, like other institutions, must continually enlist and renew the commitment of each new generation if they are to survive and carry on their work. At perhaps no other time in the nation’s history has this task been more challenging for America’s religious faiths than it is now.

It is not that the country’s newest generation of young adults, the Millennial Generation, rejects the spiritual values that deeply permeate the nation’s culture.

Americans, to a greater extent than those who live in other Western countries, believe in God (in numbers ranging from two-thirds to 80 percent depending on how pollsters ask the question). Millennials, born in the years 1982 through 2003, fully share this belief with older generations, according to the Pew Research Center. Two-thirds of Millennials (64 percent) are certain God exists.

In spite of these beliefs, however, a large majority of Millennials (72 percent) describe themselves as “more spiritual than religious,” according to a LifeWay Christian Resources survey.

And for any who may believe that the generation’s lesser commitment to specific denominations or participation in religious rituals simply stems from youthful skepticism, Pew tracking surveys indicate otherwise. Millennials are twice as likely to be unaffiliated with a specific denomination than were baby boomers in the 1970s and 1-1/2 times more likely than were members of Generation X in the 1990s – when both of those cohorts were the age that Millennials are today.

In the end, however, perhaps the biggest impact Millennials will have on the country’s religious landscape is to increase its diversity and expand the definition of what faiths are recognized as part of the American mainstream.

Since ratification in 1791, the First Amendment has protected the rights of religious minorities and nonbelievers. But from the beginning, the United States has been predominantly a Christian, and more specifically, a Protestant, nation. The Millennials put a large dent in that description.

As a result of all these trends, only two-thirds (68 percent) of Millennials are Christian, compared with about 80 percent of older Americans. Fewer than half (43 percent) are Protestant, in contrast to 53 percent of all older generations and almost two-thirds of senior citizens.

The nation’s religious diversity is likely to increase even more in coming years as ever greater numbers choose spouses across denominational lines. The percentage of mixed-faith marriages rose from 15 percent in 1988 to 25 percent in 2006.

Millennials are particularly willing to cross denominational boundaries in selecting a life partner. In a 2010 survey, less than a quarter of 18-to-23-year-olds thought it was important to marry someone of the same faith. How might America’s religious denominations respond to this less ritualistic and more diverse future?

For religious faiths that are thousands of years old, it may make long-term sense to be comforted by the lesson offered in Ecclesiastes, as amplified in the boomer anthems of Simon & Garfunkel and the Byrds: “To everything there is a season, and a time to every purpose under the heaven.”

Those who study generations say that American history is cyclical rather than linear. In about four decades a new, young generation of the archetype labeled Idealist by generational theorists will emerge into adulthood. The members of this new cohort – the children and grandchildren of Millennials – will, like today’s boomers, be driven by their deeply held internal values, among which traditional religion and its rituals are likely to be very important.

In the immediate future, however, religious organizations will have to emphasize those aspects of their belief structures that most strongly mesh with Millennial values.

On one level this means that America’s denominations will at least have to recognize that Millennials are far less driven than older generations by traditional beliefs on the cultural issues – women’s rights, homosexuality, and evolution – that have divided the nation since the 1960s.


Millennials will also be drawn by appeals that emphasize service more than doctrine and ritual. No generation in American history has been as involved in national and community service as the Millennial Generation. Millennials make up a disproportionately large and growing share of large national service organizations – the Peace Corps and AmeriCorps, as well as the armed forces.

According to the Corporation for National and Community Service, two-thirds of all youthful community service work is done through nonprofit educational and religious institutions. This faith-based community service participation lets Millennials live their spiritual beliefs in a very basic way and on their own terms. It may also help America’s religious denominations weather and perhaps even thrive in the Millennial era ahead.