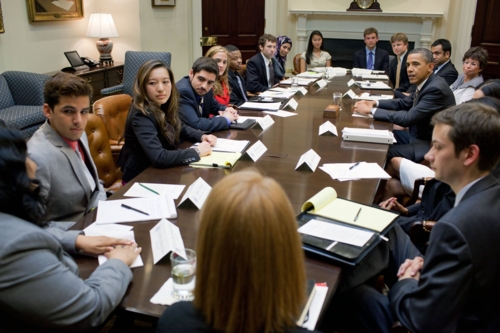 USA Today maintained that “in 2012, youth voters may prove elusive for Obama.” Michael Barone posting in the conservative Washington Examinerunder a misleading headline that “Under Obama, Millennials move into the GOP column,” could barely contain his excitement at the news that a majority of white Millennials identify as Republicans (52% vs. 41% Democratic). A careful examination of the Pew data indicates that even in 2008 a larger percentage of white Millennials identified outright as Republicans than Democrats. Most of the movement that has occurred since then was among those who leaned to the Democratic Party and had weaker ties to it to begin with.

Nevertheless, given the importance of the Millennial Generation to President Obama’s victories, beginning with the Iowa caucuses all the way through the general election, the data certainly highlighted a source of potential danger to his re-election and to Democratic hopes for regaining their position as the majority party in American politics. Such speculation however ignores some other hard facts about Millennials and why they are likely to continue to be a key part of the Democratic coalition.

Millennials are the most ethnically and religiously diverse generation in U.S. history. Forty percent of all Millennials are “nonwhite” i.e., African-American, Asian, and, especially, Hispanic. These groups will represent an even greater percentage of those Millennials turning 18 in the next decade. Virtually all of the Millennials’ movement away from the Democrats and toward the Republicans in the Pew research has occurred among white Millennials, who, in spite of their increasing Republican proclivities, still more strongly identify as Democrats to a narrow but statistically greater extent than older whites. Nonwhite Millennials continue to overwhelmingly identify as Democrats over Republicans (71% to 17%).

Millennials are also half as likely as older generations to be white Evangelicals or Catholics and a quarter less likely to be white Mainline Protestants, groups that in recent years have trended toward the GOP. While the “Teavangelicals” gathering this weekend in Texas at the invitation of Rick Perry, its governor and possible GOP presidential candidate, may represent an important part of the Republican activist base, they don’t represent Millennials. Members of America’s young adult generation are twice as likely to be Hispanic Catholics or unaffiliated with any faith and a third more likely to be non-Christians — Jews and increasingly Muslims, Hindus, and Buddhists — groups that tilt toward the Democratic Party. Any political movement that attempts to use Christian doctrine as the core of its appeal is sure to turn away most Millennial voters.

There are a range of other factors that seem likely to limit a wholesale movement of Millennials to the Republican Party, so long as it adheres to its current belief system. For one thing, Millennials clearly endorse an economically activist government. A March 2011 Pew survey indicated that by 54% to 39% Millennials favored a bigger government that provides more services rather than a smaller government that provides fewer services. Moreover, most Millennials are confident that governmental activism is useful in ameliorating societal problems. A majority of them (52%) believe that government often does a better job than people give it credit for. These beliefs suggest that for many Millennials the major complaint about President Obama and his party is not that they favor “big government,” but that they haven’t used government as often and effectively as Millennials would like.

In addition, one in five Millennials has an immigrant parent. Not surprisingly then, large majorities of Millennials believe that immigrants strengthen the country (69%) and support a legal pathway to citizenship for undocumented immigrants (82%).

Most Millennials (including white members of the cohort) are also strikingly tolerant on social issues. About two-thirds believe that homosexuality should be accepted by society (69%) and support the legalization of gay marriage (64%).

Such attitudes make most Millennials uncomfortable with the anti-immigrant and religiously conservative views that so many Republicans, particularly Tea Partiers, espouse. As a result, some young Republicans such as Meghan McCain, the Senator’s daughter, and Margaret Hoover, the 31st president’s great granddaughter, have called on their party to moderate its stance on social issues in order to attract Millennial voters.

Finally, most Millennials do not approve of the GOP’s current highly ideological approach to politics. The Millennial Generation is made up of pragmatic idealists who search for win-win solutions to the problems facing the nation.

As a result, in a Pew survey conducted during the recent dispute over raising the nation’s debt ceiling, a large majority of Millennials (71% to 57% for older generations) preferred a balanced approach that would have combined spending cuts and tax increases to deal with the federal deficit. Two-thirds of the generation (65%) called on Washington politicians to compromise with those holding different views in order to prevent federal government default rather than sticking with their principles (28%). Not surprisingly, after viewing the summer’s events in the Capitol, a large majority of Millennials (60% vs. 27%) believed that the Republican rather than the Democratic Party was most likely to take “extreme” positions on issues.

Of course, none of this is etched in stone. The Democratic Party still has to convince Millennials that it can effectively use government to solve the problems confronting their generation and the nation if it is to retain the cohort’s loyalty. But the GOP is in the much more difficult position of having to change almost its entire imagery and approach to politics and government in order to win over skeptical members of the Millennial Generation. GOP attacks on Pell Grant funding andattempts to restrict student’s ability to vote suggest many Republican office holders haven’t gotten the message about the importance of this new generation of voters. The big question for Republicans is whether their ideological Boomer leadership will ever be willing to alter their ideological principles to accommodate Millennial attitudes and beliefs.


As we point out in our book, Millennial Momentum: How a New Generation is Remaking America(to be published in September), Millennials will comprise a quarter of the voting age population in 2012 and more than one out of every three adult Americans by 2020. In politics, as with just about everything else, which way Millennials decide to go, will determine the country’s future. Right now, that future is up for grabs.