Oscars Ratings 2013: Awards Finally Appeal to the Only Demographic That Matters 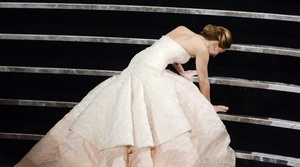 The producers of this year’s Oscar show, Craig Zadan and Neil Meron, deserve credit for attempting to overcome the challenges of putting on a show that has to appeal to multiple generations, even if the results were decidedly mixed. By choosing Seth MacFarlane to host the show, the Academy took some risk that his type of snarky humor wouldn’t offend viewers from older generations too much. In the end, MacFarlane managed to skewer every politically correct Boomer shibboleth, potentially costing the Oscars viewers next year should he return. But, in exchange, his reputation and the presence of major millennial stars brought the production major gains among viewers in the key 18-49 year old demographic.

Seth MacFarlane’s sense of humor is grounded in his Generation X sensibilities. Left to fend for themselves while growing up in a time of failing institutions and economic stagnation, X’ers pride themselves on their ability to poke fun at the establishment’s pretenses in order to shock it into paying some attention to their own generation, the most criticized of all of America’s current generations. Whether it was singing about the women in the audience who have exposed their breasts in movies; or having his creation, Ted, insist that Jews control Hollywood; or ending the show with a tribute to Boomer’s worst nightmare, losers; MacFarlane showed off the wit that has made him rich and the attitude that ensures none of his own movies are likely to win an Oscar.

The Academy also had an opportunity to celebrate millennial stars Sunday night, from the precocious Quvenzhané Wallis, born at the end of the generational cohort in 2003, to Anne Hathaway, born at the beginning of the Millennial generation in 1983. The rising star in the millennial firmament today is Jennifer Lawrence who earned her Best Actress Oscar for her leading role in Silver Linings Playbook, a quintessential millennial movie about overcoming family and personal dysfunction with a (spoiler alert) happy ending for doing just OK in a dance contest. Lawrence’s now infamous face plant on the steps up to the stage to accept her award also captured the “not yet ready for full adulthood” nature of her generation. Dressed in a very grownup gown that even attracted the hands of a grandfatherly Dustin Hoffman on the red carpet to properly “flounce” its train, Lawrence couldn’t quite pull off the “look at me, I’m all grown up” act in her moment of triumph. But her unpretentious and self-effacing come back line upon reaching the podium spoke volumes about the refreshingly different attitudes and behavior this generation brings to the Oscar party.

If the Academy embraces millennials’ optimistic, team-oriented spirit, it may find a way to satisfy all the generations in its audience without offending anyone. The Oscars should be a celebration of the movie industry’s ability to entertain America in a way no other medium can. With more films like this year’s crop and a hip host, the Academy might rescue its reputation for unrelenting hostility to the future and win over the hearts and minds of the key demographic it yearns to attract.