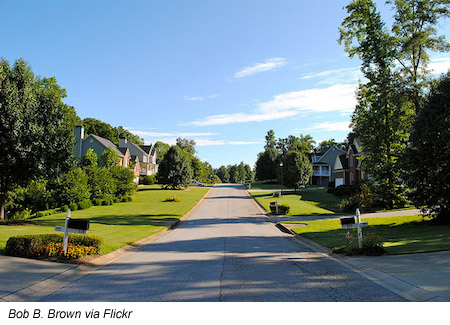 The latest survey data on the  living preferences of the Millennial generation (born 1982-2003) once again validates the picture of a cohort that, contrary to urban legend, actually prefers the suburbs, even as they prepare to shape the suburbs in their own image. We and others have previously made this data-based point on this website. The results of the survey challenges the often wishful thinking of academics and ideologues who yearn for a more urbanized, denser America.

The Demand Institute commissioned the Nielsen company, to survey 1000 Millennial households about where and how they plan to live over the next five years. The results suggest a major transformation of the country’s housing markets is about to take place that will benefit those who know and understand Millennials and respond to their desires.

There are 13.3 million households headed by Millennials today. During the next five years that number is projected by the Demand Institute to increase by over 60% to 21.6 million as many Millennials take their first steps toward marriage and family formation.  While only 30% of the 18-29 year olds interviewed were now married, seven out of ten said they expected to be within the next five years. A majority (55%) also anticipate becoming parents during this period. As a result, 71% of those interviewed said, that over the next five years, they planned on moving to a better home or apartment; about half expect to “own, not rent” their new home.

This burst of family formation, of course, is quite typical for thirty-year olds, a plateau that millions of Millennials will reach in the next half-decade. And, rather than diverge from the pattern, Millennials are following it in their own way. This is good news long term for the economy since their major lifestyle changes will lead to a burst of spending by Millennials. The Demand Institute’s report suggests that, between now and 2018 the generation will spend $1.6 trillion on home purchases and $600 billion in rent. The big questions are where will they spend all that money and what will they spend it on?

The Suburbs is the clear answer to the first question. Forty-eight percent of the Millennials interviewed said they planned on moving to the suburbs, while only 38% said they would be moving into large urban areas. A scant 14% planned to move to rural environments.

The type of suburban living these Millennials favor, however, is a little different than many of the developments builders are planning to offer. Sixty-one percent say they are looking for more space in their next home than they currently enjoy. An additional 24% want at least the same amount of space. A mere 15% express a desire to live in less space, something often assumed by retro-urbanists, in a presumably more crowded urban environment.  Furthermore, although substantial numbers prefer having major amenities within walking distance, most Millennials say they are willing to take a “short drive” to restaurants (54%), grocery stores (61%), and even shopping centers (57%). This suggests that new “walkable” suburbs, including large planned developments on the fringe and Millennial-“gentrified” close in suburbs, all with single family homes, are likely to be the places that benefit most from this wave of Millennial  family formation and spending on housing.

The single biggest barrier to the country enjoying this burst of new spending remains the Millennial generation’s unique burden of student debt. While three-fourths of Millennials believe home ownership is both an important long term goal and a good investment, only 36% believe they will be able to buy their next home, rather than rent. The impact of student debt on this purchasing decision can clearly be seen in the current behavior of 30-35 year old Millennials. Only half of those with student debt now own homes, while two-thirds of those lucky enough to graduate college without such debt are home owners. This clearly indicates that student debt reform is the single most important issue facing realtors and home builders future success. It should be their priority in Washington.

In the meantime, there may be some creative ways to confront this problem; 69% of the four-in-ten Millennials who believe they could not qualify for a traditional mortgage are open to leasing a new home with an option to buy it later.

The results of this survey make it clear that the nation’s housing future remains in its suburbs. Those communities which can offer Millennials the type of lifestyle they desire will be rewarded with growth. Those that cling to outdated notions of what constitutes urban or suburban living will find it difficult to compete for the Millennial generation’s housing dollar and the vibrant economic activity that will flow from their choices.