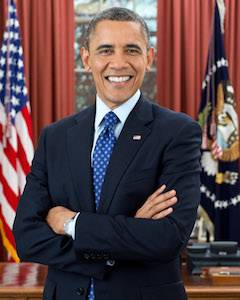 resident Obama will be seen by historians as the first president to bring millennial values to the challenges of the Oval Office. He isn’t a millennial (in fact he has two millennial children), but his leadership style and beliefs reflect America’s largest and most diverse cohort. And while much of the rest of America is divided on how well he has performed as the nation’s 44th president, Obama has won overwhelming approval from the millennial generation, born 1982-2003.

More than three-fourths of millennials (77%) approved of Obama’s job performance in a mid-December, 2016 Pew Center survey, surpassing even the previous high mark the group gave him — 73% — just after his first inauguration in 2009. For much of his administration, millennials were only marginally more positive about the president  than the rest of the population, but once his departure from office drew closer  and the contrast between him and either of his potential successors — Donald Trump and Hillary Clinton — became clearer, millennial approval of the president’s job performance shot up by about 15 percentage points, accounting for just about all of the increase he has enjoyed in his final year in office.

Some of the enthusiasm stems from millennials’ perception that Obama tackled the issues they care about most. Almost half of millennials (46%) credit the president with making significant progress “toward solving the major problems facing the country,” a far greater percentage than for any other generation. Only 10% of millennials, compared with 30% of older generations, think he made things worse.

Millions of millennials have health insurance because Obamacare allowed them to remain on their parents’ plan. Theirs is the only generation in which a majority tell pollsters they support the Affordable Care Act. Millennials in particular have also benefited from Obama’s initiatives to reduce the interest rates on student loans and allow millions to convert loan repayments to a percentage of income rather than a more onerous flat amount. In addition, the president’s improved job-performance marks,  especially their latest rise, reflect improvements in the economy that millennials now see in their incomes.

But more than any specific benefit, millennials appreciate the way Obama has championed their causes and created a more tolerant America.

One in five millennials has an immigrant parent,  and most in the generation credit the president with trying to find a comprehensive solution to the immigration issue especially for the youngest “Dreamers” who found new hope under the president’s Deferred Action for Childhood Arrivals executive order. By carefully building a foundation of support of gay rights, Obama’s leadership also helped in the push to enshrine same sex marriage among our constitutional protections. According to Pew surveys, close to three-quarters of millennials view immigrants and immigration positively (76%) and support gay marriage (73%); less than a majority of older age groups agree.

Finally, Obama’s daily demonstration, as our nation’s first African American president, that race should not be a barrier to achievement has reinforced millennials’ desire to include everyone in the group and to celebrate their own diversity. In fact, some of the president’s finest millennial “whisperer” moments have come when he addressed the question of race in America, including his eloquent speech on the topic as candidate Obama during the 2008 Democratic primary. In an interview with NPR, he couched his answer to a question about political correctness with a defense of tolerance that fits millennial attitudes:  “Don't go around just looking for insults," he said, quoting advice he has given his daughters. "You're tough. If somebody says something you don't agree with, just engage them on their ideas.”

It’s not surprising that the same set of Americans that overwhelming approve of Obama would disapprove of the man who will replace him as president on Jan. 20. Already 64% of 18-29 year olds disapprove of Trump’s performance as president-elect, the highest disapproval rating of any age group in Pew’s January, 2017 survey.

Millennials will represent more than one out of three Americans by the end of this decade. Despite Trump’s electoral college win in November, it seems likely that millennial attitudes will dominate American political discourse and policy decisions in the coming years. It’s not clear now how much this generation’s demographic and political importance shaped Obama’s presidency and how much the cause and effect ran in the other direction. But it is clear that the optimism the president expressed in his farewell address is based in large part in his faith in his children’s peers:

“This generation coming up — unselfish, altruistic, creative, patriotic — I’ve seen you in every corner of the country. You believe in a fair, just, inclusive America; you know that constant change has been America’s hallmark, something not to fear but to embrace, and you are willing to carry this hard work of democracy forward. You’ll soon outnumber any of us, and I believe as a result that the future is in good hands.”

And with that the country’s first millennial president left the stage.