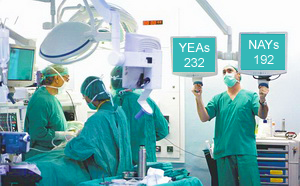 Depending on one’s partisan leanings, the desire of House Republicans to shut down the federal government if the Democrats don’t agree to repeal ObamaCare may seem to be either a courageous ideological stand or a kamikaze mission sure to destroy its proponents, if not the country. However, from a generational perspective it is not only a predictable but a necessary step in the country’s search for a new consensus on the role and size of government.

Nor is it coincidental that the current confrontation is coming to a head just as the Affordable Care Act (ACA) is about to be implemented nationwde. The roles that the legislation assigns to the federal government, states and individuals in securing every citizen access to medical insurance is such a departure from the existing civic ethos it has become the touchstone for the debate about the nation’s civic ethos in the  Millennial Era. Yet, ironically, the law everyone wants to argue about actually provides a blueprint to any politician willing to go beyond their current ideological comfort zone and solve a range of challenges in ways that respond to the beliefs and behaviors of the emerging Millennial Majority in the electorate.

ObamaCare is the model for how Millennials will change the role and size of government at all levels in the future.

As finally passed by a Democratic Congress in 2010,  ACA creates a relationship between the federal government and the nation’s adult population similar to the role Millennials’ parents have played in their young children’s lives.  Parents pronounced rules to guide their children’s behavior with consequences (“time outs”) if the rules were broken. Similarly, the ACA requires each individual to purchase health insurance and provides penalties (taxes) for failing to do so, an approach the Supreme Court ruled lawful under Article I, Section 8 of the United States Constitution. And, just as parents and other members of the extended community helped Millennials succeed within the boundaries of the rules they established, ACA envisioned a series of state by state health insurance exchanges that would help each state’s residents find the type of insurance they wanted at a cost they could afford. As those exchanges open for business in about half of the states this week, this new configuration of American democracy will be put to a practical test, but the fundamental concept is likely to be recognized in the future as the basis for a new civic ethos as distinct from the Reagan era of limited government as was the New Deal  from its laissez faire predecessor.

History suggests, however, that the country must go through a crisis as bad as the one it is facing today before this happens. The New Deal was born out of the perils of the Great Depression. Reagan’s tough love solution of lower taxes and less government regulation required years of economic stagflation before it became conventional political wisdom. Today, neither of those ideas has proven equal to the task of breaking the country out of the economic doldrums of the Great Recession.

Older politicians will have to get beyond their ideological blinders to recognize the opportunity waiting for any candidate or political party that can embrace both halves of the Millennial era civic ethos paradox. Members of the Millennial generation are as suspicious of large government bureaucracies as any libertarian but as dedicated to economic equality and social justice as any liberal. To resolve the crisis, the GOP should embrace ObamaCare as a great example of how government can encourage individual responsibility and accountability and Democrats should sign up for President Obama’s commitment to creating a smarter, smaller less bureaucratic government.  Only when the crisis becomes so bad that a few brave leaders break out of their ideological bunkers and discover a new civic ethos that embodies both collective action and individual responsibility will the Millennial Era civic ethos emerge from the chaos created by a Congress so out of step with the beliefs and behaviors of the  future leaders of the country.