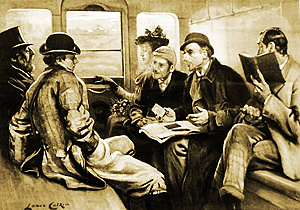 In his most recent “Cook Report,” one of Washington’s most respected prognosticators, tries to pull off a sleight of hand worthy of a con man on a NY street corner trying to get his mark to play a game of  Three Card Monte.

First, Cook shows his readers the target card by correctly pointing out how important the Millennial Generation’s vote will be to President Barack Obama this year.  In November 2008, voters between the ages of 18 and 26 comprised about 17% of the electorate and voted by a greater than a 2:1 margin for Barack Obama (66% for Obama and 32% for John McCain).  With older generations dividing their votes almost evenly between the two candidates, Millennials accounted for about 80% of Obama’s national popular vote margin over McCain, turning what would have been a narrow win into a decisive seven-point victory.

This year, members of the Millennial Generation, representing all voters 30 and under, will make up an even larger share of the eligible voter population, about 24%. But, Cook says, as he moves the cards around on the table, they aren’t likely to vote for Obama by the same margin. He bases this prediction on the conventional wisdom, that “When an incumbent is running, the election is usually a referendum on that person rather than a choice between two people.” He hopes you won’t pay attention to the word “usually” in that sentence,  However, as we point out in our book, Millennial Momentum, 2012 is more likely to be one in which the country makes a choice between two radically different visions of its future that will be offered by the two candidates. In decisive elections of this type, which occur about every eighty years, the normal “rules” are not likely to apply.

Having enticed his readers into thinking about the 2012 election as a referendum on the president, Cook conveniently cites approval ratings for Obama among Millennials that are months out of date. The March 18, 2012 survey from Gallup, the firm Cook usually relies upon,  showed that 55 percent of 18- to 29-year-olds approved of Obama’s performance as president, up from 44 percent in early December.  While not a 2:1 margin, these numbers are hardly a signal of a close election among Millennial voters.

Cook also fails to mention another set of data that shows Obama beating all of his potential GOP rivals by the same 2:1 margin that Millennials gave him in 2008. In a November, 2011  Pew survey, for example, voters under thirty preferred Obama over Mitt Romney, the likely Republican nominee, by a 61% to 37% margin. Given that there will be 16 million more Millennials eligible to vote in 2012 compared to 2008, and Millennials’ continued partisan unity, America’s largest generation could give Obama an even larger number of votes over his rival in this year’s election, even if the president’s  margin of victory among these voters is slightly less than it was in 2008.

But Cook wants those looking at his constantly shifting cards to focus on a completely different, much less representative piece of prognostication. He cites the outcome of two focus groups in Ohio and North Carolina conducted by Resurgent Republic, a polling firm “headed by veteran Republican strategist Ed Gillespie and longtime pollster Whit Ayres.”  Resurgent Republic talked to a group of Millennial voters in each of those two states whose independent status was determined by each participant being “undecided on the generic presidential ballot test.”

Continuing his efforts at political sleight of hand, Cook conveniently fails to mention that such voters are least likely to vote or to be aware of current political candidates and issues. Instead, he tries to entice his readers to lose track of the target card (usually the Queen of Hearts), by suggesting they  pay attention to this quote from Gillespie, “If these groups are representative of this demographic at large, it will be a tall task to counter their disillusionment.” The word “if” is Cook’s final attempt at misleading his mark. The participants in the focus groups were deliberately selected on a characteristic that makes them very unrepresentative of Millennials overall, among whom no more than 5 percent were completely undecided in the presidential race according to the most recent Pew survey.
Cook also introduces some side chatter around the game by talking about his own anecdotal impressions of the lack of enthusiasm and interest in politics on the campuses he has visited.  Never once does he mention that this phenomenon may be more due to the nature of the GOP primary than any lack of support for President Obama. According to CIRCLE’s analysis of young voters, through Super Tuesday, the vote totals for Mitt Romney, Rick Santorum, and Ron Paul combined was  less than half the Millennial votes  Barack Obama had received at this point in the primary campaign of  2008.

Cook concludes his completely misleading piece with one nod to the Obama campaign’s policeman standing on the corner about to break up the game. “It’s safe to assume that the president, the White House, and his campaign are looking for ways to deal with this problem [of Millennial voters].” Obama is sure to engage Millennials by talking about the help his administration has provided them with the cost of attending college, his increased funding of more national service opportunities, and the more than two and a half million Millennials who now have health insurance through their parent’s policy thanks to ObamaCare. Already the campaign is gearing up online and offline organizational efforts to bring Millennials to the polls in November that exceed the technological sophistication of its very successful efforts in 2008.

Other than the state of the economy, the most pivotal factor in determining the outcome of the 2012 general election is likely to be the extent to which America’s youngest voters repeat their 2008 electoral performance in 2012. If Millennials vote in numbers proportionate to their presence among eligible voters, their continued support of the president should allow him to overcome any attrition he might suffer among older voters. But if large numbers of Millennials do not vote, the president’s reelection chances will be sharply reduced. That’s one fact that no one should think the Obama campaign will lose sight of despite Cook’s attempts at prestigious feats of political prestidigitation  designed to distract the unwitting reader.