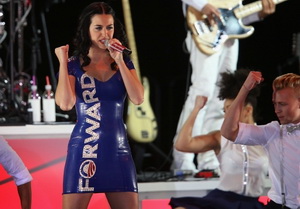 Millennials made up 19 percent of the electorate in 2012, a point or two more than their share of the 2008 electorate. Unlike four years ago when the Millennials' share was equivalent to that of senior citizens, this time they outpaced the senior share, which fell to only 16 percent of the electorate. Although final turnout numbers are difficult to calculate until all the votes are counted, CIRCLE research data suggests that the Millennial turnout rate approached the celebrated performance of their generation in 2008. In both years , the number was about 50 percent of those eligible, with much higher rates of turnout in the critical battleground states.

For that reason, Millennial organizations can stake a legitimate claim to having made the difference for President Obama in states such as Pennsylvania, Ohio, Florida and Virginia. Even as Hispanic voters reached an historically high level of participation, Millennials, about a quarter of whom are Hispanic, became a powerful 23 million strong segment of the electorate, a number that will only grow larger over the rest of this decade.

So far, just about 60 percent of Millennials have turned eighteen. Over the next eight years, all Millennials will become eligible to vote, representing a 95 million voter opportunity for whichever party is willing and able to successfully recruit them. If Millennials continue to participate at around the 50 percent mark that they have in the past two presidential elections, they will eventually represent about a 47 million member constituency, twice the numbers that they were in 2012.

But it's not just the size of the generation that makes Millennials such a powerful political force. The previously largest American generation, Baby Boomers (born 1946-1964) have been hopelessly split in their political opinions and preferences ever since they ignited the cultural wars of the 1960s. This makes Boomers less of a political opportunity as an entire cohort and of more interest to politicians when they are segmented along other lines, such as the infamous and well-known gender gap that they created starting in the 1980s.

Millennials, by contrast, have consistently voted in a highly unified manner. Two-thirds of them voted for Barack Obama in 2008 and 60 percent of them voted for his reelection this year. Even though there are significant ethnic differences within a generation that is 40 percent non-white, Millennial voting behavior continues to show the powerful pull of their generation's consensus-oriented approach to decision-making.

Millennials are now a key part of a 21st century Democratic coalition that includes minorities and women, especially college-educated and single women of all ethnicities, which together now represents a majority of American voters. As the number of Millennial voters continues to grow throughout this decade and the generation preserves its unity of belief, something which political science research suggests will happen, Millennials will have the pleasure of experiencing many more electoral triumphs in the years ahead.