'The Great Gatsby' Soundtrack: Jay-Z, Will.I.Am Belong On It 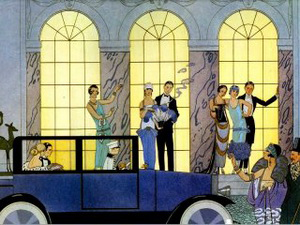 Baz Luhrmann’s 3D interpretation of F. Scott Fitzgerald’s iconic novel about the Jazz Age has critics raving about its visual effects and its capture of the cultural zeitgeist of the Roaring 20s. Many critics however have suggested that he jumped the shark by adding rap music from Jay-Z, Will.I.Am, and others to the movie’s musical score. But for those who know their generational history, the linkage is not only appropriate, but right on key.

F. Scott Fitzgerald was the poet laureate for what Gertrude Stein named the "Lost Generation," born in the twenty years before the turn of the 20th century. Entering young adulthood, members of the generation were awestruck by the changes the industrial revolution had wrought in America and eager to find a new path to success in the affluence of the Roaring 20s. The Lost Generation’s music was jazz — considered a dangerous new genre by many older Americans. Born in the bordellos of New Orleans, Jazz and its emblematic dance, the Charleston, encouraged its fans, dressed in daring new colors and styles, to lose their inhibitions in the energy of its syncopated rhythms. The orgiastic parties in Luhrmann’s new film captures this sense of a country gone wild with new riches, searching for a new morality to match more modern times.

The parallels to today’s Generation X are obvious, and not entirely coincidental. Born between 1965 and 1982, this small, frequently criticized generation rejected contemporary mores and unleashed a torrent of economic and personal risk-taking. Whether it was the celebration of Wall Street greed in the 1980s or the dot.com boom of the 1990s, Gen-X’ers saw new opportunities to make money without sacrificing their lives to the drudgery of corporate life. Their music was rap — another supposedly dangerous new genre, born in the urban ghetto, filled with misogynist and sadistic lyrics sung to a pounding rhythm that created a new global culture built around its hip hop beat and its unique style of dress.

It is hardly surprising then, that when Jay-Z was asked to score the soundtrack for The Great Gatsby, he immediately saw the connection between his own life and that of the novel’s central character. Jay-Z agreed to be the executive producer of the soundtrack, telling Luhrmann, “The thing about this story is that it’s not a question of how Gatsby made his money, it’s is he a good person or not? … And all these characters, do they have a moral compass?”

Reaching back into history, the creators of the new movie saw the similarity between the Lost Generation and Generation X, both of which rejected society’s strictures and boldly pursued a hedonistic, personalized path to the future. F. Scott Fitzgerald ends his novel with the immortal line, “So we beat on, boats against the current, borne back ceaselessly into the past.” But the past also contains another lesson for the cohorts born in the wake of such nihilistic generations.

Most of America’s GI Generation, called its greatest generation by Tom Brokaw, only felt the riches of the Roaring 20s during their childhood. They came of age in the poverty of the Great Depression and the terror of World War II. Yet they conquered both, went on to live happy, middle class, conformist lives and built most of the corporate and governmental institutions that we live with today.

Like their GI generation counterparts, millennials, born 1982-2003, have found themselves trying to find jobs after entering the workforce in the middle of another economic downturn, the Great Recession. The young lives of millennials were shaped by the terror of 9/11, shootings at schools and movie multiplexes, and bombings at marathons. Yet millennials remain the most optimistic, upbeat generation in America today, confident of their ability to work together to change the world for the better.

When the green light from Gatsby’s dock fades from view as Luhrmann’s film ends, audiences need to remember that thanks to generations like 20th Century GIs and 21st Century millennials, the country’s future is bound to be bright once again.